In the UK, we don’t have gay marriage, at least not at the moment. We do have a very similar institution: civil partnerships. These have been around since late 2005, and the statistics are interesting. In England and Wales between 2006 and 2010, there were 40,921 civil partnerships. Over the same period there were 1,184,158 marriages.

In other words, 3.34% of all legal unions in England and Wales were civil partnerships, and the rest   (96.66%) were marriages. The figures, broken down by year, are shown in the following table and graph. 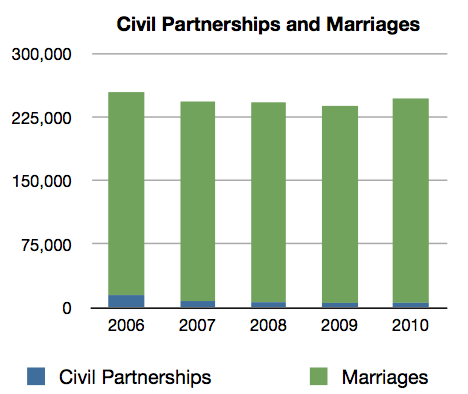 When you look at the graph, you can see that civil partnerships are a small proportion of legal unions. So small, in fact, that it seems pretty incredible to think that they are destroying, or even significantly harming ‘traditional’ marriage. If the 3.34% of civil partnerships are destroying the 96.66% of marriages, then marriage must have been pretty weak to begin with. If you argue that gay marriage somehow debases, changes or harms straight marriage, then you are actually arguing that straight marriage is a very weak institution.

There is a third significant observation about these figures, which we can only see when we look at additional data. According to Sexual Behaviour in Britain, 90.2% of men and 92.4% of women report exclusively heterosexual experience and attraction. If the scope is widened to include people who have experienced mostly heterosexual attraction or experience, the figures are 96.0% and 97% respectively1. You would expect that the gender you are mostly or exclusively attracted to would be the gender you end up marrying. Roughly 96% to 97% of people are mostly or exclusively heterosexual and roughly 97% of legal unions are (heterosexual) marriages. Gay people (or people in gay relationships) are availing themselves of civil partnerships at the same rate that straight people (or people in straight relationships) are availing themselves of marriage. It would seem that gay people want to get married just as much as straight people.

I'm Andrew. Belfast born, Cambridge educated, working in Dublin. Married to Michael (who is also known as John). I earn my living by writing, mainly documentation, but I write fiction as well. As well as my personal blog, I run Gay Christadelphians.

2 thoughts on “Marriage and Civil Partnerships”